Yes, that is really the name of the restaurant that just opened up in downtown Harrisonburg. Owner Andrew Fernando, a New Jersey native, explains that Cuchi means cute and guido means little boy in Italian. I don’t think there is such thing as a cute guido. ZING!

I called the new restaurant earlier in the afternoon to ask their for their hours. Rather than a “hello” I recieved a greeting of “Thanks for calling Cuchi Guidos. Are you hungry?” Yes, yes I was hungry but that wasn’t why I was calling. I can’t imagine having to work there and repeatedly having to say that line. What’s worse, when entering the place the whole staff has to yell “Welcome to Cuchi Guidos.” Ahh, my pet peeve from Coldstone has traveled to this restaurant. Nonetheless, the awkward introductions are tolerable due to the food.

I went to the restaurant with my roommate, Courtney, who immediately let Fernando know we were doing a food review on them. All the sudden he started to yell to his cooks and I could only pick up a few of the words he was saying: “Pepperoni!…These girls!…Steak and Cheese!!” The next thing I know we are being told to go have a seat wherever we want.

I turned to Courtney and whispered the words, “What just happened?” She shook her head and asked “Did we just order?” As we were about to walk up to the second floor Fernando yelled to us “Pepperoni or cheese?!” I had no clue what was going on at this point and I slowly said “pepperoni?”

We walked up the spiral staircase and took a seat under the fluorescent lights.

It was easy to see that there are still some tweaks that Cuchi Guidos (every time I type that name I just can’t take anything I say about it seriously) needs to figure out. While we were in there they had an electrician setting up cameras and getting the “stage” area ready for the bands on the weekends.

Our waitress came to our table and asked us what we would like to order from the limited menu. Since it’s still the restaurant’s first week they have had to cut back on their extensive menu. (Fernando said during their opening they sold over 200 steak and cheese within 2 hours.)

As you can see from above the menu is indeed limited. The actual menu should come into play some point this week.

After looking at the menu quickly, Courtney told our waitress that we think we already did order. She laughed and explained that Fernando is extremely generous and she wouldn’t be surprised if it was all on the house.

We got the Brooklyn style pizza, a panzarotti, a steak and cheese and bread knots all to our table.

The panzarotti, something I’ve never heard of, comes with it’s own directions on how to eat it. You actually have to be literate in order to eat this meal. It’s basically a deep fried calzone filled with cheese, sauce…and pepperoni. Apparently this is what I was ordering earlier on. Courtney mentioned that the panzarotti tasted a lot like the inside of a tostitos pizza roll. I would have like more sauce either inside the pocket pizza or on the side.

You take a big bite from the corner and steam and cheese come oozing out. The crust was a little sweet and reminded me of a beer batter. Watch the video below to see the inside of the panzarotti.  Although the directions tell you not to put it down I had to move on to the pizza. 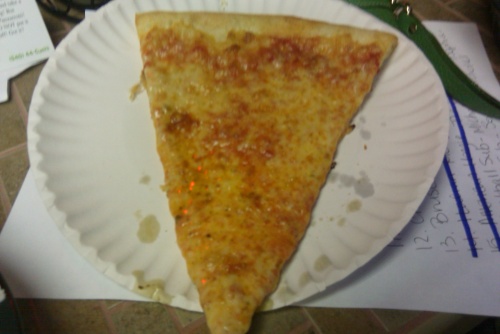 Now I spent my summer in NYC and know good pizza when I taste it. I have found that whenever a restaurant outside of the Big Apple advertise NY style pizza it never is. In Cuchi Guido’s case, they offer Brooklyn style. I don’t know if there is really that much of a difference but I do know this is the closest thin crust NY style pizza you’ll probably find in the area. I found the pizza to be lacking a little flavor and I would have liked the crust to be crispier on bottom. Still, I would be happy to come back for pizza from here if I can’t make my way up to NYC. I’d be even happier to experience the 28″ pizza.

I moved my way down to the steak and cheese topped with chopped onions and set next to crispy fried potato chips.

The ribeye is chopped up and this place doesn’t go light on their servings. Steak was pouring out of the fresh bread everytime I took a bite. Cheese and mayo also oozed out. Fernando says the bread, along with the bread knots come in fresh everyday from a secret location up North. Hmm, I may need to start some investigative journalism. 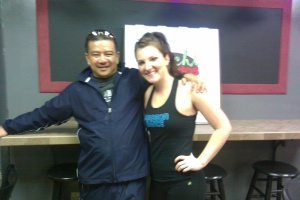 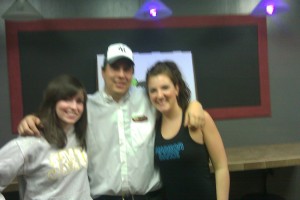 Here is Courtney, Fernando, the GM Ross Teague and I looking extremely awkward. This was still during the point where I had no idea what was going on. I will say that it’s clear Fernando takes pride in his restaurant and is always making sure his customers are happy.

I overheard him talking with an upcoming band about their set for the weekend and about every five minutes he was offering them slices of pizza.

Guido’s is open till 3 a.m. and delivers. If you’re looking for something to do on weekends, they will have bands and comedians performing and they have a pretty good selection of beer on tap.

And yes, Courtney and I finished all that food.